Daily Trust Foundation trained 297 journalists in 2019 in various aspects of journalism. The training was made possible through a grant received from MacArthur Foundation of the US, specifically for a national campaign called “On Nigeria Project”.

Twelve sessions were held. They included seven paper presentations, among them one on  “Legal and Regulatory Issues in Investigative Journalism in Nigeria,” by Femi Falana, which was the lead paper. There were two paper discussion sessions; two question and answer sessions, and one  on fact-checking the investigative story.

This was a two-day workshop that held on April 8 and 9, 2019 at the Rockview Hotel, Wuse 2, Abuja. It was designed to address issues related to the legal and ethical challenges faced by investigative reporters in Nigeria. The workshop was meant to put journalists and security operatives in the same room to iron out differences that have led to the mutual suspicion and animosity between them.

Twelve sessions were held. They included seven paper presentations, among them one on  “Legal and Regulatory Issues in Investigative Journalism in Nigeria,” by Femi Falana, which was the lead paper. There were two paper discussion sessions; two question and answer sessions, and one  on fact-checking the investigative story.

This was a four-day training that commenced on July 15, 2019 and ended on July 18, 2019. The workshop was designed to equip journalists involved in digital story-telling with the capacity to use the camera for investigative reporting. This was necessary in order to use the digitally-inclined media to achieve the “On Nigeria” objectives.

There were 37 trainees  at the workshop: 29 were from Daily Trust newspaper and one each from The Authority, Blueprint, Daily Nigeria, Peoples Daily, PRIMORG, CISLAC and two from Connected Development (CODE). There were 11 females and 26 males.

The workshop was meant to equip photo-journalists with the necessary theoretical framework and practical steps for taking photographs that are investigative in nature.  Twenty-eight journalists were drawn from different newspaper to participate in the training. They include 20 from Daily Trust newspaper, one each from The Authority, Blueprint, Nigerian Television Authority (NTA), Daily Nigerian, Peoples Daily, PRIMORG, CISLAC, and CODE. There were 20 male journalists and 8 female journalists. 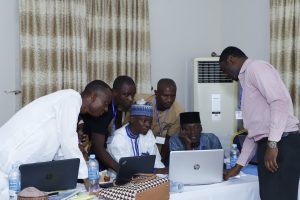 The session was opened with an encouraging speech by the Director (Africa), MacArthur Foundation, Dr. Kole Shettima on why investigative reporting is crucial for deepening transparency and accountability in all the systems in Nigeria. Others who facilitated sessions included Malam Mannir Dan-Ali, Chief Executive Officer and former Editor-in-Chief of Daily Trust; Mr. Azubuike Ishiekwene, The Managing Director/Editor-in-Chief of The Interview magazine, Mr. Hamzat Ajibola, the Editor at The International Center for Investigative Reporting (ICIR), Mr Dayo Aiyetan, the Executive Director of ICIR, Barrister Kabiru Bala, Daily Trust’s Company Secretary,  and Dr. Theophilus Abbah, the Programme Director of Daily Trust Foundation.

Twenty-five editors and line editors were trained, 22 of them are with Daily Trust newspaper, while the remaining three were from Daily Nigeria, People’s Daily, and NewsDiary. 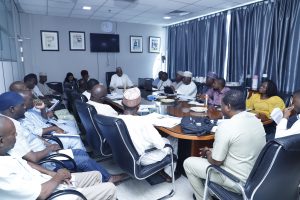 Workshop on Data Mining and Use of Excel

The workshop was meant to introduce the trainees to the use of Microsoft Excel for data analysis and how to use various online tools for data visualization. It was facilitated by a crop of trainers from a data analysis start-up, Dataphyte, headed by Joshua Olufemi.  The workshop brought together journalists from different media organisations and civil society organizations.  Twenty-five journalists were trained in this workshop, 21 were from Daily Trust newspaper, while the remaining four were from Peoples Daily, The Authority Newspaper, Legit.ng and PRIMORG.

The training was meant to help those on the creative desk of the newspaper in learning new approaches to design and infographics.  It was handled by Mr. Jai Kumar Sharma of Asia Media Design, New Delhi, India. Twenty-one journalists were trained, 17 were from Daily Trust while the remaining 4 were from Peoples Daily, Blueprint, The Authority newspaper, and Connected Development (CODE). There were three females and 18 males in total.

This workshop was meant to put members of the National Youth Service Corps (NYSC) and Students Industrial Work Experience Scheme (SIWES) through the principles and practices of investigative reporting. There were practical sessions, with copious individual and group assignments, that would help them participate and create infographic designs on their own. Twenty-four trainees participated from Daily Trust, Daily Times, and The Authority newspaper with five males and 19 females.