On October 12, 2018, Romoke Ahmad, a reporter with Daily Trust, received a shock at a press conference in Ilorin, in relatively peaceful Kwara State. Not under the shadow of bandits, not under the radar of terrorists, Ilorin should be a safe place for journalists to practice media and journalism. But at the press briefing, organized by the All Progressives Congress (APC), then an opposition party gathering momentum to wrestle power from the Peoples Democratic Party (PDP), a man pointed at her, saying “this is the lady who did the report.” Still lost at what a member of the APC meant, Romoke was shocked that thugs quickly surrounded and began to assault her. Luckily, she lives to tell the story.

Politicians are suspicious of journalists:

Against the assumption that only journalists who cover conflicts are at risk and should take safety measures seriously, Romoke was not attacked in Borno, Yobe, Zamfara, or any of the states plagued by terrorists and bandits. She was assaulted in peaceful Kwara State.

At a one-day workshop on Safety of Journalists in Conflict Reporting, put together by City, University of London, and Daily Trust Foundation in Abuja on January 19, 2023, it came out clearly that Nigerian journalists, not only those who cover violence, must know what it takes to protect themselves and deliberately take steps to protect themselves.

The lead facilitator at the workshop, Dr. Abdullahi Tasiu Abubakar, who is the Director of Ph.D. Programmes in the Department of Mass Communication, City, University of London, told participants, drawn from 12 media houses, that journalists must not relegate their safety to the background, no matter the beat they cover.

“You must do risk analysis of any assignment you are to cover, especially if you cover conflict zones,” Dr Abubakar told the 22 participants. “You should be able to think about possible challenges you’d face on the field. If you are to cover a protest, you must be sure you are safe, wear shoes that would enable you to run if a protest turns violent; you must keep a distance from protesters; must ensure you’re not asthmatic, and if you are,  don’t get exposed to teargas by the police…”

At the workshop, participants were taken through what they must do and what they must not do in different scenarios, like covering banditry and terrorism, while conducting investigative reporting or interviewing criminals; if kidnapped or when covering political rallies, etc.

Nigeria as a big conflict scene

During the discussion session, led by Dr. Theophilus Abbah, Programme Director, Daily Trust Foundation, hypothetical scenarios in the country were considered. Dr. Abbah described Nigeria as a scene of conflicts, arguing that journalists must think of safety in whatever beat they cover.

Using data sourced by the Centre for Journalism Innovation and Development (CJID), on Press Attacks, between 2017 and 2022, Dr. Abbah said as many as 266 journalists had come under attack, many of them, like Romoke, physically assaulted, kidnapped by bandits, denied access to political events, arrested and detained by security operatives, shot at by gunmen, barred from covering courts, threatened by governors and their lackeys, and their equipment confiscated or destroyed.

The data sourced from news reports by the CJID indicated that journalists are at risk in all states of the federation, but below are the nine states where journalists have come under pressure. 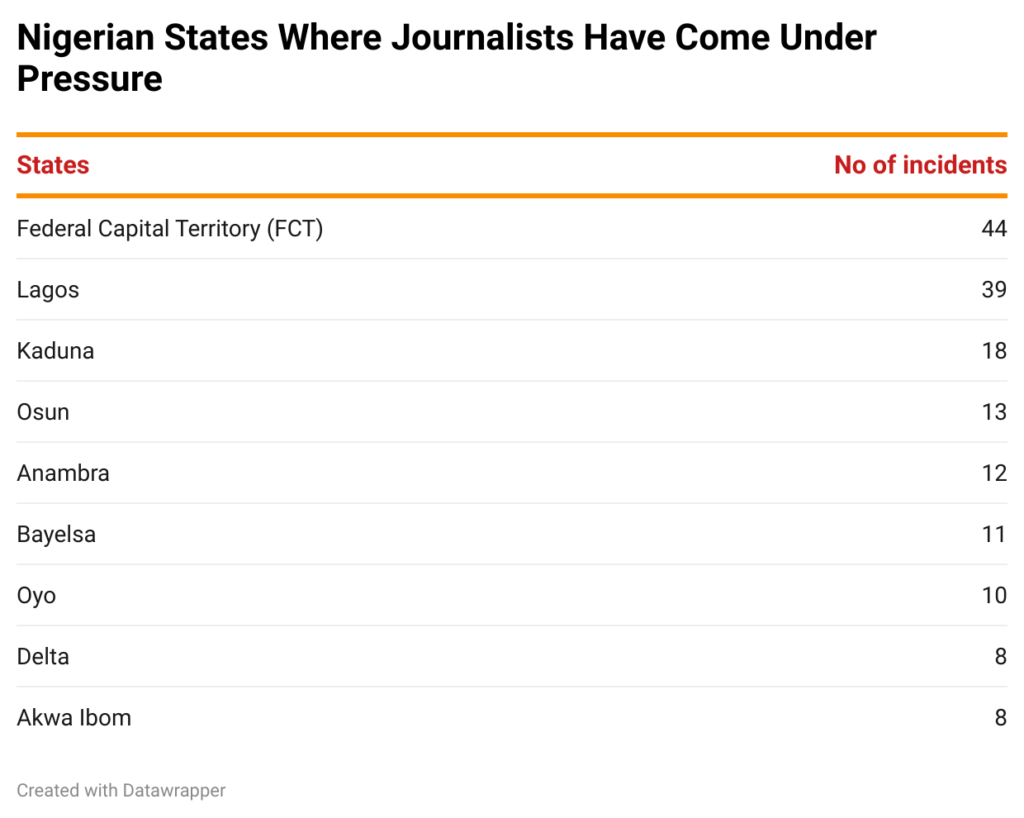 Other states that feature on the chart for multiple attacks on journalists include Edo, Abia, Kogi, Ebonyi, Bauchi, Nasarawa, Kwara, and Ekiti States.

Journalists come under attack the most in election years. The incidents in most of the states occurred before and during the conduct of elections. It follows that at the minimum, journalists must be on guard when covering election rallies and during the voting process. There were many instances in which journalists were assaulted by thugs and security men while taking photographs of vote buying and abuse of the electoral process. Unfortunately, security operatives did little or nothing to stop those reporters from being assaulted.

Apart from attacks during elections, the following are circumstances in which journalists have come under serious attacks in Nigeria, as reported by CJID.

How journalists can ensure safety

Malam Mannir Dan-Ali, a former Chief Executive Officer and Editor-in-Chief of Daily Trust charged journalists to keep to the basic rules of journalism as a way of protecting themselves from danger. These include the rules of fairness, balance, objectivity, neutrality, and basic safety tips for every journalist. Those who practice journalism in line with the profession’s tenets may not be exposed to too many hazards. Mannir said, at Daily Trust, reporters in conflict zones are carefully selected to ensure none is exposed to danger. According to him, “in Plateau State, for instance, Daily Trust had to hire multiple reporters. Some who are Christians report crisis from the perspectives of Christians while we have Muslims who report the experiences and views of Muslims. This way, the reporting is balanced and no journalist is put at any risk. As you know, Jos has since been sharply divided along religious lines, to the extent that residential areas are either Muslim or Christian. We have to ensure all sides are given fair coverage in our reporting.”

To ensure safety, journalists must keep to basic rules. Some are as follows:

There are many precautions to take. However, it is important for journalists to use their common sense to assess whatever situation they find themselves in to avoid being hurt or attacked. For instance, it is not smart to resist it if a gun-trotting criminal asks a journalist to leave a scene or a venue of an event. Not obeying could be dangerous.

Dr. Abbah is the programme director, of the Daily Trust Foundation, and a Fellow of the Chartered Institute of Forensic and Fraud Examiners of Nigeria. You can follow him on Twitter @theophilusa.